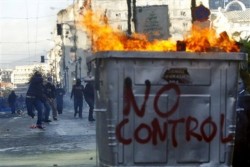 The interview that follows was conducted by Ntina Daskalopoulou and published in an Athens daily this morning. It is translated and posted here as is: with no comments, additions or explanations – none is needed. After 36 days on hunger strike, Thodoros’ words are crystal clear. In his face, the State has found an enemy to unleash all its revanchist rage, some rage in reality directed against an ever-growing current of disobedience, resistance and solidarity. As long as there are people like Thodoros standing up to the wrath of the State, the next December will always be close. In the struggle against their order, Thodoros is not alone.

Eight months in pre-trial detention for December’s events, the last one also on hunger strike. His anticipated release in July never came, the theatre of the absurd of the charges against him continued and Thodoris remains incarcerated. But a fighter. This time, his “weapon” is his own body. He spoke to us over the phone from the prison of Korydallos. From there he sees the revanchist face of the State, that Greece of violence and repression but also another Greece of the restless youth, of the faith in ideals. Insisting on his innocence and his own beliefs. Paying dearly for both.

I hear his voice with intermissions from the loudspeakers blasting orders to the prisoners of Korydallos. He is extremely polite, low-pitched, strong within his weakness. Now fragile, but determined, in the middle of August, the month with no news, he fights the struggle for his freedom with the only weapon he has left: His own body.

– The state prosecutes you for legal offenses, felonies and misdemeanors, and considers you so dangerous that will not release you under restrictive terms. How do you feel about this?

“From December 18 I found myself being a protagonist in this theatre of the absurd. They arrested me together with others en mass, as I was walking down Akadimias Street with some friends. Five riot police units surrounded around ten of us. I started running and two of them caught up with me, they threw me on the pavement and started kicking me in the head, screaming “now you’ll see what will happen to you”. I had no idea what would happen to me. Finally, what happened was that I found myself charged with three felonies. According to the inquisitor, at the moment of my arrest I was outside the Law School throwing molotov cocktails. The only witness account existing of this is that of the two riot police who arrested me. When the inquisitor asked them if they would recognise me on the street and they responded positively, she put up her finger, showed me and said, “is it him?” She exposed me herself! Of course, the riot police… recognised me. From that point on they won’t release me because in reality they need me as hostage. From the arrested only a few took a stance for December. I’m not saying they were obliged to. I took a stance and I am faced with the State’s reprisal.

– How did you experience the December events?

“My dad is on his final days and he is suffering from altsheimer and my mom is 83 years old and cannot look after him. For this reason I only made it to the streets twice, unfortunately. It was a very good opportunity to discuss and to think, to offer solutions, to exchange ideas. Some, with dubious interests, read the events with crocodile tears, they weep for the disaster and the destruction. And yet December gave birth to a different way of thinking and most importantly, it took kids away from their playstations and internet cafes. It is naive and unfair to say that the kids took to the streets only to ease their rage. They were claiming their ideals and their dreams”.

– What was your stance toward the State and what is it now?

“If I tell you, they’ll throw me in jail for life… I’m kidding. I don’t want to assign any labels to myself, like anarchist or anti-authoritarian. I am a visionary of direct democracy, of deciding and acting together. During my teen years I was fascinated by the philosophy of anarchism from Zenon to the cynics and all the way to Enrico Malatesta. Even today, I remain fascinated by these. I am struggling for a different world. Not with molotovs and stones, but with ideas and texts. I am not the first nor the last to which the state shows its revanchist face. What bothers them, what they repress is not my action, but my stance and my ideas. They charged me with fabricated charges, they ignored the proofs I submitted of my innocence. The issue, for the state, is that I insist on thinking. And I think differently. In this sense, tomorrow morning you – or anyone else – could find yourself in my position”.

– Do you now fear the country called Greece?

“No. It is frightening to walk down Akadimias street and then to find yourself locked up in a cell for months, but I have such a great desire to live that I am not afraid. And also, beyond the Greece of repression and violence, I also see another Greece, that of a restless youth, solidarity, faith in beliefs”.

– Why did you chose the hunger strike?

“When anyone commences a hunger strike, they should normally be examined by a dentist – it is the teeth that get damaged first – and a psychiatrist to prove that s/he is not suicidal. Although this did not happen in my case, I want to assure you that I am not suicidal, I do not at all want to die. Neither do I want to suffer some irreversible damage that will leave me injured for the rest of my life. Of course, as explained by my doctor, after the 30th day of hunger strike the really serious problems begin, as some of your vital organs can fail. But really, I have no other option left. My body is my ultimate weapon.”

– Does the hunger strike flirt with death?

“Everything flirts with death. If you are a migrant, a visit to the playground of Ayios Panteleimonas can automatically mean your death. Or if you are a worker in a factory. Or if you are a cyclist in the streets of Athens. A hunger strike can bring you a few steps toward death, but closer to freedom. As the foreigner that I am in the bosses’ world, as a worker, as a cyclist, I never feared death. As a hunger striker I live with the hope of liberation, not with the fear of death”.

– You are in love, you were preparing for your release in July and a common house with your lover. What do you two say now?

“We spend endless hours talking everyday, she writes to me and I write to her, we plan out our life. We are very close, we face this as a team. The prison limits the freedom of the body, not your soul. Each time we hang up she tells me venceremos. We are young, in love and have so many beautiful things to live together. And we shall win”.

– What dreams do you see?

“In the beginning I had nightmares. With a daily struggle I managed not only to eject anything that could destroy me, but also to have dreams with power and joy. I have chosen to live creatively this chapter in my life”.

– What did you learn in prison?

“Every prison is a miniature of the society. You see people convicted of financial crimes who are interested in doing business even here, all the way to child molesters. But you also see innocents, people who had no money for a good lawyer or to pay their bail. Before coming in here I was dogmatic about this, I thought that… it’s the bad ones who are in prison. Yet in here you are forced to understand that what is bad is subjective, to admit that anyone could be a potential murdered under given circumstances.

“Everything is inside us. In prison you learn new codes and, most importantly, to trust no-one. And some ways that help your life. Here you live with the absolute minimum. What we consider rubbish outside, is useful here. Who would ever know that in order to cover your bookshelves with a curtain you would use burnt ear buttons instead of glue?”

– How do your fellow prisoners treat you?

“Political prisoners were always treated with respect by the penal ones, although I don’t want to make this distinction. We are all imprisoned and we face the same problems. We as well, even if we are political prisoners, face the penal code. My fellow prisoners support me: Nikos Tsouvalakis went on hunger strike on the same day as me, in solidarity. Other prisoners abstain from their meals. Most of them support me with simple, everyday actions: They visit me in my cell, they lend me books, they give up their place in the phone queue. ”

“You are locked up 18 out of 24 hours in a space of maximum 8 square meters, together with another 3 prisoners. The heating is insufficient. Cockroaches and rats often make their appearance. The toilets are in the basement with broken windows and cold water.”

– The prisoners say your biggest enemy is time. How do you spend your days?

“The corridors, the prison bars and the barbed wire. All this has put me in the process of creating another reality, comprised of words and paintings”.

What would you tell the minister of justice if you saw him?

“I would read him a poem by poet Titos Patrikios:

I pluck the words one by one from my throat/

if they ooze blood/ wrap them in your handkerchief/

wrap them in cotton/

or then maybe grab them with a clip and say/

“he’s only saying these, to make an impression”/

Do what you want,/

but silence is not enough no more/

words are not enough no more/

I pluck the plain words, one by one/

and I send them to you.”

– How do you dream of your life after prison?

“Plain in terms of living, rich in terms of thinking – and I also want us to have a kid that won’t ever leave me alone!”

– After all this grueling experience, would you take to the streets again?

“Of course. With the only difference being that I will be absolutely ready to face any fixed-up charges. After all, I always took to the streets with my face as my only hoodie.”

„At the dawn of industrialism,
factories were modeled after prisons;
in its twilight, prisons are now
modeled after factories.“
Os Cangaceiros